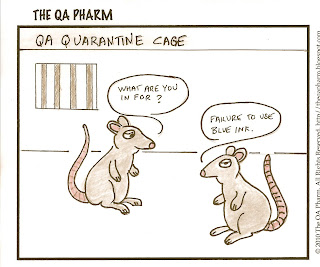 Are Commitments Made to FDA to be taken Seriously?

Responses to FD483’s and Warning Letters are usually fully of commitments. They involve “what” will be done to correct compliance problems, and “when” it will be done. FDA has even started to ask “how” they will be done, meaning—Do you have the resources to do the work?

If these questions are not fully addressed in the FD483, then FDA will say so in the subsequent Warning Letter in the part where they acknowledge receipt of the firm’s FD483 response—and the inadequacy of it.

My first point is that there is no excuse for an inadequate response to an FD483 or a Warning Letter.

There are plenty of Warning Letters on the FDA website that provide examples of poor responses and what the FDA thinks about them. There’s no excuse for not knowing how to respond. (Also see The QA Pharm, October 10, 2010.)

Reasons for poor responses are:

·       Arrogance (What problem? Let me explain why we have no problem.)
·       Bad advice from house counsel (Dance around the edges, but never admit having a problem.)
·       Minimalism (Commit as little as possible and don’t look for other problems.)
·       Being far removed from the problem (Responses are so bad that it makes your technical insiders embarrassed.)
·       No root cause (Doing lots of stuff, but very little directed toward the real problem.)
·       Poor writing skills. (Difficult to follow the story line, because you have no idea what you want to say.)

My second point is never, ever miss a commitment date.

If anyone were to ask the leadership of any company under FDA enforcement action whether FDA commitments should be taken seriously, the response would be a resounding “Of course.”

It continues to amaze me how many companies miss commitment dates. And even more amazing—the senior management had no clue they had missed them. This is totally unconscionable and an indicator why the company has compliance trouble in the first place.

Reasons for missing commitment dates are:

·       No system to track responses and commitments
·       Responses and commitments are buried with hundreds of other TrackWise records, most of which are also overdue
·       Overly project managed until there is more planning than action
·       Lack of visibility as a standing agenda item in the management boardroom
·       No accountability at any level for results
·       Agency responses are kept a secret, or not sufficiently distributed to employees
·       Those responsible for doing the work had no idea that a commitment was made

The best way to think about the seriousness of a commitment to the FDA is to remember that the FDA already suspects a noncompliant firm to be untrustworthy—or at best they are neutral about their credibility. To not deliver on a commitment date just confirms their suspicion and puts the relationship between the firm and FDA on shaky ground.

Not providing an adequate response simply indicates being out of the mainstream of pharmaceutical industry know-how. And missing commitment
dates is nothing less that breaking a promise.

How would you feel if you were not taken seriously?

John E. Snyder (The QA Pharm)
I'm an observer of the pharmaceutical industry from inside and out for over 40 years. I've worked at the lab bench and on the management board. If you have a passion for Quality Assurance and understand the relationship of current Good Manufacturing Practices to your patients and your business, you will find a kindred spirit here.